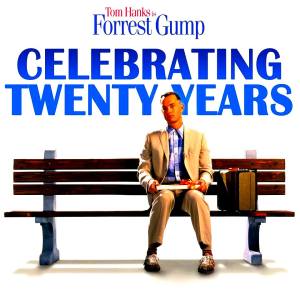 American folk heroes and their stories are an old favorite of mine (Johnny Appleseed, Rip Van Winkle, etc.) and I have a young adult book series in mind involving them. As part of my research, I thought I would read a modern-day tall tale: the book version of Forrest Gump.

Like many of us, I’d watched the film when it came out in movie theaters (20 years ago it seems). I have enjoyed it many, many times since. The film may fit into that category of, you’re downright un-patriotic if you haven’t seen it. It’s witty, iconic, tragic, poignant and carried by an amazing soundtrack and the acting treasure, Tom Hanks.

I figured the book would be similarly so (minus soundtrack and Hanks). I was wrong. Book-Forrest has a similar trajectory through global events and he models “stupid is as stupid does,” but that’s about where the similarities end. Book-Forrest is vulgar, a pessimist and uninspiring. This is one of the very first times I’ll recommend the film over the book.

Film-Forrest inspires me to join him: watching the feather in the perfectly blue sky, running across America, cuddling under the covers as the thunderstorm rages outside, struggling with the fear that his son is like him. Children’s book writers can take note that Forrest’s favorite book is Curious George.

There are any number of favorite scenes and iconic quotations to choose from but the set of scenes that always make me laugh are when Gump first joins the army and he amazes his drill sergeant with his ability to follow orders without question (a skill I lack):

Drill Sgt: Gump! What’s your sole purpose in this army?
Forrest: To do whatever you tell me, drill sergeant!
Drill Sgt: Goddamn it, Gump! You’re a goddamn genius! That’s the most outstanding answer I have ever heard… Why did you put that weapon together so quickly, Gump?
Forrest: You told me to, Drill Sergeant?

The oft-repeated lines are great of course, but the only one I’ve probably used is:

That’s all I have to say about that.*

Forrest: You know it’s funny what a young man recollects? ‘Cause I don’t remember bein‘ born. I, I don’t recall what I got for my first Christmas. I don’t know when I went on my first outdoor picnic. But I do remember the first time I heard the sweetest voice in the wide world.

Jenny: Listen, you promise me something, OK? Just, if you’re ever in trouble, don’t try to be brave. You just run, OK? Just run away.

Lt. Dan: Try not to do anything stupid, like get yourself killed.
Forrest: I sure hope I don’t let him down.

Forrest: One day it started raining, and it didn’t quit for four months. We been through every kind of rain there is. Little bitty stingin‘ rain… and big ol‘ fat rain. Rain that flew in sideways. And sometimes rain even seemed to come straight up from underneath. Shoot, it even rained at night…*

Forrest: If I’d a known this was gonna be the last time me and Bubba was gonna talk, I’d a thought of something better to say… Hey Bubba.
Bubba: Hey Forrest…
Forrest: Then, Bubba said something I won’t ever forget.
Bubba: I wanna go home.
Forrest: Bubba was my best good friend. And even I know that ain’t something you can find just around the corner. Bubba was gonna be a shrimping boat captain, but instead, he died right there by that river in Vietnam. That’s all I have to say about that.*

Forrest: What’s my destiny, Mama?
Mama: You’re gonna have to figure that out for yourself.

Forrest: My Mama always said you got to put the past behind you before you can move on.

*Similar quotations found in the book.

"Talent...does not object to sharing." ~Solzhenitsyn

Kristen is passionate about storytelling. She is currently telling her own story in a novel and other writing. She is available to help tell your story, too! Follow Kristen's California adventure...

Fun, unusual and forgotten designations on our calendar.

because anything is possible with Charisma